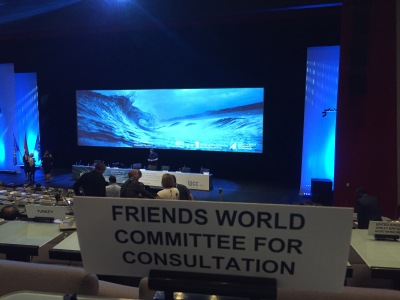 QUNO, under the Friends World Committee for Consultation, is the only faith-based organization accredited as an observer to the Intergovernmental Panel on Climate Change (IPCC), which collates the most recent climate science findings to advise all countries. While government representatives cannot change the underlying scientific text in the reports, they can negotiate language in the Summary for Policy Makers (SPM), so long as the integrity of the findings is not affected. From the 19th to the 24th of September states gathered in Monaco to discuss a special report which focused on the state of the ocean and the cryosphere, which refers to places on earth where water is in solid form such as glaciers, permafrost, and ice sheets. This report was particularly significant as it explicitly discussed some of the processes already occurring due to climate change, such as coral bleaching, ocean acidification, and glacial melting, alongside future projections of further change.

Lindsey Fielder Cook, QUNO’s representative for the Human Impacts of Climate Change programme, made a number of interventions concerning adaptation limits, human impacts and permafrost melting, and worked with negotiators to ensure the rights language of public participation in climate policy was included.  This report contains significant urgency for it is speaking to what many are already experiencing, particularly those most vulnerable such as the inhabitants of Small Island Developing States and indigenous Arctic communities. The report highlighted the difference between urgent action to reduce greenhouse gas emissions – manageable change – and continuing with insufficient action – unimaginable and unmanageable change to glaciers,  biodiversity and marine life, and the ability of  access to drinking water for billions of people. the report urges international action.